Every animal we know is identified and recognized by its specific coloring, but genetics often fail, much to our delight.

You’ll see that many species have rare color variations that make the animals more precious, and at the same time more vulnerable. But what a wonder they are...

The sparkling colors of the peacock make him gallant and allow him to attract females. However, some peacocks are born albinos, which creates the combination above when you mix the two. What a fascinating animal!

This kind of tiger with a much brighter coat than the Bengal tiger isn’t a product of nature, but a miscegenation made possible by keeping the animal in captivity as part of a zoo or a circus. The tiger above has not been officially named, but it is commonly called the "Golden Tiger" or "Venetian Tiger" in reference to its color. It is the result of crossing a white tiger and a Bengal tiger that may have happened several generations before (the gene is recessive). We aren’t sure if we should rejoice in the existence of this unnatural animal, but let’s not forget that the tiger is endangered.

This insect that we have always known as green also comes in several other colors. In North America, because of a recessive gene, there are pink, yellow, and orange katydids. The pink type, because of its bright color that doesn’t match the color palette of its environment, is the most interesting because its existence defies everything we know about evolution.

When you think about the chances of a normal turtle’s survival being 1 in 1000, you have to worry about this small and very rare albino turtle, seen near the Great Barrier Reef in Australia. Not having the colors of her fellow turtles, she can’t benefit from the camouflage that allows them to avoid certain predators. Still, we wish her a long life.

While many animals have an albino version, albino snakes like this are very rare. They are born with color, but their skin gradually fades over time.

Also called the “Antarctic fur seal,” this little animal has the distinction of being covered with fur. It is found in the cold waters of the Antarctic. And while the majority of them have a dark coat, 1 in 1000 is born blond, which makes them more vulnerable because they are clearly distinguishable in a crowd of fellow creatures.

7. Nutria with its albino mother

The only species of nutria still present in France, the European nutria lives mainly near freshwater swamps. Formerly hunted for its fur, then to protect fish farming, it is now protected but is a victim of pollution. As we see here, some of them can be born albino.

Did you ever know that bi-colored lobsters existed? This characteristic (found in 1 out of 50 million) is due to a genetic mutation, and they may be born yellow and beige, to be transformed later into blue and red as seen above. They are also hermaphrodites: male on one side of the body and female on the other. Even rarer is the white lobster (1 in 100 million). Unfortunately, you won’t see them end up on your dinner plate, because they are so exceptional that they’re only for research.

This small albino kangaroo is more vulnerable than its comrades, because their usual gray and taupe color allows them to blend in with their environment to avoid predators. He’s also prone to sunburn. We haven’t known about this animal for a long time. In fact, the first white kangaroos were sighted only 5 years ago, in Namadgi National Park, Australia.

This strange little deer called the “Seneca White Deer” isn’t an albino. It just has a recessive gene giving it a beautiful white coat, but it has brown eyes. The largest group of this type is found in Seneca County, New York. The first of these animals were (fortunately) caught within the barbed wire of the Seneca Army Depot, where they were protected against predators. The "white" gene then expanded in this habitat, which is why Seneca now has the largest group of white deer in the world.

Zebras are all black in the womb. Some of them develop white stripes, but a small number that produce too much melanin remain almost entirely black. The reason for the stripes remains a mystery to scientists: some claim that it is to fight against insects, while others say it’s to protect themselves from the heat or simply to blend in with their habitat.

This poor toad should not rejoice in its extraordinary color because it stands out in its mainly green habitat. Therefore, it’s very vulnerable to predators. 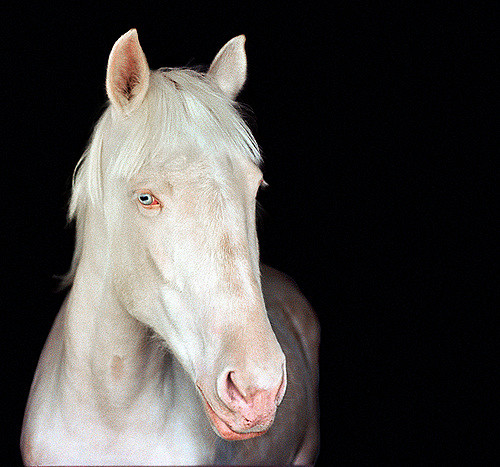 Appreciated for its fairy tale look (similar to the unicorn), the white horse, often mistaken for the gray horse, is not an albino. It has a recessive gene that is quite rare.

Not to be confused with the polar bear, this animal is from the family of black bears that live in British Columbia, Canada. There are about 200 of them, and the natives call them "spirit bears" because their color makes them sacred.

Hunted for its unusual color of fur, the silver fox (which produces too much melanin) once adorned the clothes of wealthy Russians, Chinese, and Western Europeans.

1 out of 300 seals has a rare color (either white or black) in the North Sea. These animals are not outsiders; they are treated the same as all the others in the group. On the other hand, like most rare colored animals, they are much more vulnerable to predators than their comrades, because they stand out in the crowd.

These animals are rare because not only can they not blend into nature like other snails, but they can’t compensate with greater speed. Therefore, they are hard to find, and they were only recently discovered in New Zealand.

This young, pink hippopotamus suffers from leucism, or a lack of pigmentation, and was photographed in Kenya.

We thought we knew everything about the cat, but this genetic quirk is so rare that most of us have never seen one of these. In most of these extreme cases, the cat has one blue eye and the other is either green or brown.

No introduction needed, this poor animal has become part of our language...

The actors from Harry Potter today, 14 years after the first installment...

21 photos with something interesting going on in the background

21 people who were snapped doing some pretty crazy stuff!