We're so used to cutting edge technology and continual advances on the scientific front that we forget how certain inventions or techniques came about.  Even more surprising is that many of the objects we take for granted today were actually invented thousands of years ago. Here's a list of 12 amazing inventions that would forever change the course of scientific history.

Corrective surgery has been practiced for thousands of years - ancient populations, like us, had to deal with accidents, deformities and a host of other morphological problems. The Ancient Egyptians led the way, as illustrated by a wooden big toe found on a mummy dating back to 1000BC.  There's also evidence of Egyptian surgeons performing rhinoplasty as far back as 3000BC! Since then, prosthestic and cosmetic surgery has developed in leaps and bounds, particularly during the two World Wars, when casualty numbers were particularly high.

If there's one thing many of us take for granted it's flushing toilets! What you may not know is that ancient Indus Valley civilizations invented a complex sewerage system in Mohenjo-Daro (Pakistan today). The Romans are also famous for their waste-related engineering - around 600BC, they covered an Etruscan canal and turned it into a fully-functioning sewer. Known as the Cloaca Maxima, it was an impressive urban achievement considering the size of the population it served.  That said, Mohenjo-Daro was larger and presented a greater challenge.

A difficult object to date, but in 1930 an archaeologist working for the National Museum of Iraq unearthed the Baghdad battery. The exact purpose of this cylinder made with a copper sheet and single iron rod is yet to be confirmed, but many experts believe it was used as a battery for gold and silver plating.

The first flamethrower was used by the Boeotians during the Peloponnesian War. It was made out of a copper pipe that used a bellow to spurt a flaming liquid onto enemy forces.  It could well be thanks to this ancient 'cutting edge' technology that the Boeotians managed to crush the Athenians and win the Battle of Delium.

If you rely on your trusty alarm clock to wake you up every morning, then thank Plato, who invented a device to call his pupils to class. It was basically a water clock or clepsydrae that made a sound when it was empty. The idea clearly took off, as models from Ancient Rome, Asia and the Middle East have since been found, including the famous Chinese fireclock.  Mechanical clocks, however, didn't appear until the 13th Century - a European invention that including chiming clock towers. Portable clocks appeared during the 15th Century, leading to the appearance of watches.

Ancient 'robots' were obviously nothing like modern age technology, but were still capable of performing automatic movements. Numerous civilizations used this technology to manufacture figurines that would beat a metallic instrument and the ancient lighthouse of Pharos is one famous example. Self-operating machines and mechanical toys that could perform multiple tasks appeared in the 17th Century. Advances in engineering and The Industrial Revolution took mechanics to another level, leading to the appearance of the first remotely controlled objects and the autonomous, cognitive machines we find today.

It's hard to believe that automatic doors were invented so long ago. The first one was installed in an Ancient Greek temple, its purpose being to enthrall worshippers who believed it had magical powers. Invented by Heron, this eolipile comprised of a bowl of fire that was placed under the altar to heat water-filled pipes that in turn created the steam pressure needed for the doors to spring open.  Today, automatic doors are part and parcel of everyday life.

Another invention by Heron of Alexandria, this time in order to sell holy water to worshippers who needed to wash their hands in temples. Its purpose was also to stop them from 'stealing' this blessed water and involved placing a coin on a lever that dispensed water once the coin dropped.  The invention of this simple device means that today we can buy a wealth of products without having to stand in line at checkouts!

Two distance-measuring odometers were invented at the same time - one by Archimedes, a leading scientist of his day, and Zhang Heng, a Chinese philosopher. The first prototype consisted of a series of calibrated wheels that were designed to turn full circle exactly 400 times over the course of 1,400m (the Roman unit of measurement), allowing distances to be measured. The Chinese version used a figurine that would hit a gong after the wheels had turned full circle a pre-defined number of times.

As well as inventing an odometer and a range of astronomical instruments, Zhang Heng also designed the first seismograph capable of sensing tectonic movements and the displacement of their epicenter. It was made from a bronze urn that contained a pendulum. When a tremor moved the urn, the pendulum would hit one of 8 dragons that in turn would release a bronze ball.  This would fall into the mouth of a toad placed on one of 8 compass points.  This allowed the emperor at the time to send help directly to affected areas, rather than relying on the toing and froing of messengers - a brilliant, life-saving, early warning system for ancient times.

The Antikythera Mechanism was the first analogue computer and, thanks to its sophisticated design, could predict astronomical positions, eclipses and set the date of each Olympic Games. Invented over 2,000 years ago, its clockwork mechanism had 37 gears.

And what about laptops? This Ancient Greek grave marker shows a young girl holding what looks like a laptop - or at least that what's some people claim!  Personally, we reckon it's nothing more than a case that contains a valuable object.

The first sunglasses were made by Inuits using walrus tusks.  Horizontal slits were cut for the eyes, thus protecting them from sunlight reflecting off snow.  During the 12th Century, the Chinese designed sunglasses using quartz that are closer to what you'll find today, but their purpose wasn't to protect their eyes. They were used by judges to hide their expressions whilst they interrogated suspects. The 18th Century saw the advent of tinted glasses, but again they weren't meant to protect eyes; it was finally during the 19th century that what we know as sunglasses appeared.

And now for the fakes.. 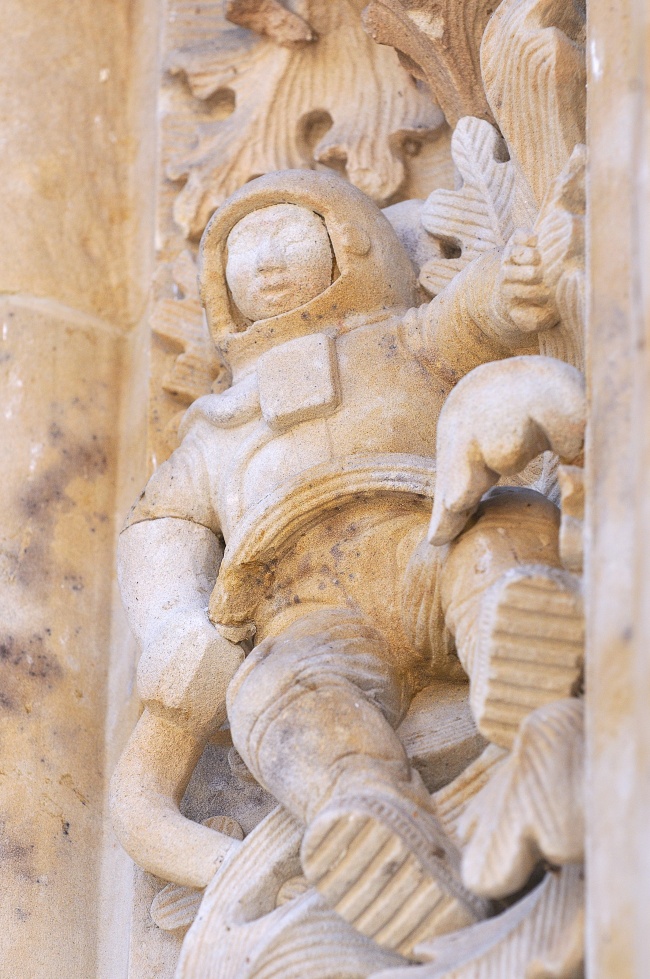 An astronaut carved on the 300 year-old Salamanca Cathedral. 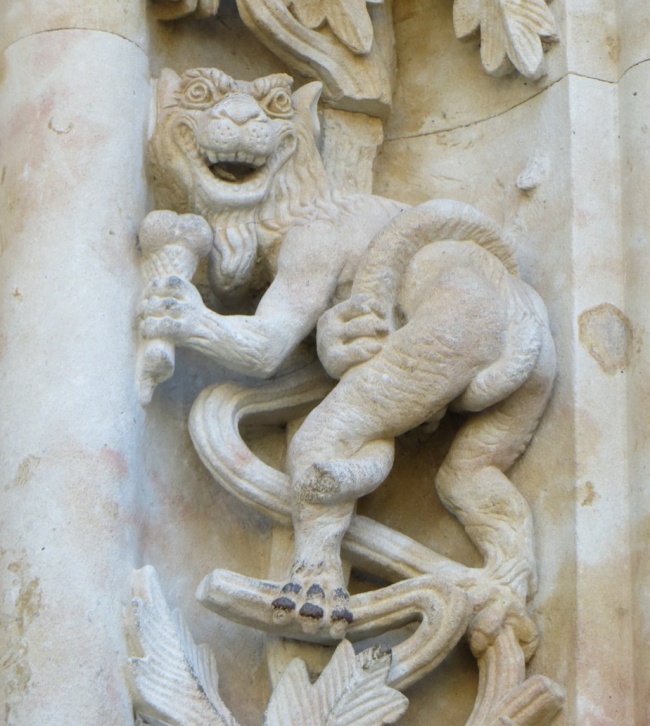 Not to mention the cathedral's ice cream-holding fawn. A humorous addition by a sculptor who restored the monument in 1992.

So, what's your take on this 1933 painting - Umberto Romano's 'M. Pynchon and the Colonization of Springfield'? Some believe one of the native Americans is sending an SMS, but in reality we believe it was a mirror and not an iPad precursor!

The 10 problems that today's kids will never know...